The Temptation of Judah and Joseph, Part 1

Good morning! Welcome to Sunday school! Please turn in your Bibles to Genesis 39. We started this series by spending three weeks on the temptation of Eve in Genesis 3. Then we spent four weeks studying the temptation of Jesus, the last Adam. We could have just ended the series there! We’ve covered a lot of ground. But instead, what I’d like to do next is to go back to the Old Testament and make our way through the Bible looking at various other characters and studying how they handled temptation.

So that said, we are back in the book of Genesis today to study the stories of two brothers, Judah and Joseph, and to see what we can learn from them about sexual temptation.

Is this an important topic for us to discuss? You better believe it! From sex before marriage to affairs to pornography to gay marriage, to all of the references to those things in music and movies and TV and print materials, sexual sin in our country is absolutely out of control! Most people in our country do not even blush about these things anymore. For instance, one survey by the Barna Group in 2016 found that “Teens and young adults aged 13-24 believe not recycling (56%) is worse than viewing pornography (32%).”

Brothers and sisters, we as Christians must be different! We must not follow our world into these types of moral debauchery! Instead, we must strive after purity! And if we are going to do so, we must resist sexual temptation.

Sexual sin is nothing new, is it? For the next couple of weeks, we are going to focus on the stories of two brothers who lived almost four thousand years ago and who also faced sexual temptation.

Please turn to Genesis 38-39. I’d like to begin today by reading those two chapters aloud. This will be a much longer Scripture reading than normal, but I think it is important for us to read the whole story. So please follow along with me in your Bible as I read Genesis 38-39 (Genesis 38-39).

As we dive into the temptations of Judah and Joseph, let’s talk first about the power of the temptation. We’ll start with Joseph.

There are a number of reasons why Joseph’s temptation was extremely powerful. First, he was all alone.

Everybody knows that it is easier to resist temptation when you are surrounded by godly friends and mentors. That’s probably especially true when it comes to sexual temptation. That’s why accountability is so important!

But Joseph didn’t have an accountability partner. He wasn’t surrounded by godly friends and mentors. Joseph’s relatives who feared God lived hundreds of miles away! And as far as he knew, he would never see those people again! Joseph didn’t have to worry, for instance, about disappointing his father. He could tell himself as much as anyone has ever told himself, “No one will ever know.”

Joseph didn’t have a sexual outlet. Besides, he was a slave. He had no reason to think he would ever be married! This proposition was a unique opportunity for him! Not only that, but…

You say, “How do you know that?” Well, for one, she was rich. She had plenty of time and money to pamper herself and dress herself up. But also, Joseph’s strong reaction against Potiphar’s wife is an indication that he found her tempting. He didn’t run away from her because she was gross! He ran away because he was attracted to her and didn’t trust himself.

Another reason that Joseph’s temptation was extremely powerful was that…

This is actually a very common lie. “I’ve had a really hard day. I deserve a big bowl of ice cream,” or “a Starbucks,” or you fill in the blank. The same basic thought process can lead to sexual sin. When people are feeling sorry for themselves, they see it as their right to indulge. Of course, if anyone had a sob story, it was Joseph, but he resisted temptation.

Joseph’s temptation was extremely powerful because…

“Look at me! I’ve gone from being at the bottom of the totem pole to being Potiphar’s right-hand man! Not only that, but Potiphar’s wife is attracted to me! She likes me more than she likes her husband!” Joseph’s head could easily have swollen with these kinds of thoughts, which would have made him a sitting duck for Satan.

Many men have fallen to sexual sin as a result of pride having to do with career advancement or success. Joseph could have been a part of that statistic, but he wasn’t.

Joseph’s temptation was extremely powerful because…

Remember, despite all of the responsibility he had been given, Joseph was just a slave! Potiphar’s wife was his master! She held tremendous power over him! He could have thought to himself, “If I am ever going to get out of here, I need friends in high places! Potiphar’s wife may be able to do me a favor and let me go free!” Or, “I certainly don’t want to get on her bad side!” I think we would have to be pretty naïve to imagine that Joseph never saw the revenge of Potiphar’s wife coming. Joseph could have sinned out of fear! But he didn’t!

Not only was Potiphar’s wife incessant, but she was aggressive. She really came after Joseph! It wasn’t just that the temptation was there waiting for him if he wanted to pursue it; it was chasing him down. That’s why he had to run.

Joseph’s temptation was extremely powerful. I think that most people in his circumstances would have given in. So why didn’t he? That’s a question that we’ll answer later. But first, how powerful was Judah’s temptation?

There were basically two aspects to Judah’s temptation. First…

Judah was grieving. So the same thought process we mentioned with Joseph about feeling sorry for yourself and seeking for comfort in sin would have applied to Judah, too. Also, he was without that sexual outlet. So that was one fact; his wife had died. And the second factor was that…

That’s it! Tamar doesn’t appear to have said anything to him, she didn’t solicit him, she’s just sitting there wearing clothing that identifies her as a prostitute. Judah sees her, desires that sin, and decides to seek her out.

So who faces the bigger temptation? It was Joseph, obviously! Why then does he resist whereas Judah gives in? Let’s talk next about the means of resistance/reason for failure. First, the means of Joseph’s resistance.

I’m going to give you two evidences of Joseph’s godly character, and then we’ll talk about why character is so important.

Have you ever considered the fact that Joseph could have viewed his position of trust as an opportunity for sin? “Wow,” he could have said, “No one is checking up on me! That means that I can skim a little off the top now and then and and no one will ever know!” “Wow, the master left me alone with his wife, and she likes me! What a fabulous opportunity!”

If you are in a position of trust, you must never take it lightly! If the boss at work has given you a lot of freedom, take it upon yourself to act in his absence just the same way that you would in his presence! If someone has confided in you as a friend, do not gossip about him or her! If someone has trusted you with money, you be above reproach! And if you have been given a position of trust with a child, you better never even think about harming him or her!

Joseph’s high character is seen by the fact that he refused to violate Potiphar’s trust.

This point is very similar to the last one, but I think that you see in Joseph’s response not just respect for his position, but also a love for his master. For Joseph, Potiphar wasn’t just a boss; he was a person. Joseph was able to put himself in Potiphar’s shoes and ask himself the question, “How would I feel if someone did this to me?” And based upon his response to that question, Joseph was able to say, “No way!”

So many people today act in complete selfishness with zero regard for the lives and feelings of others! That is why theft is so rampant. People not stop to consider that this item is owned by another human being! That somebody is going to come home from work and find his truck vandalized! That the woman you are interacting with either in person or on the screen is somebody else’s wife or daughter! They don’t even think about that! It is pure selfishness!

Brothers and sisters, you and I have got to be different! I mean, if we don’t have love for one another, what are we doing here? We might as well sell the church property, Pastor Kit and I can go find a job somewhere else, and we can all have our Sundays back, if the gospel hasn’t impacted us to the extent that we love one another!

Joseph’s high character is seen by the fact that he loved Potiphar too much to sleep with his wife.

Those are the two most compelling pieces evidence in this story that point to Joseph’s high character. But there are other evidences, as well! For instance, take the fact that Joseph obeyed his father in chapter 37 by searching diligently for his brothers, even though he knew that they hated him! Take the fact that he worked hard for Potiphar and was even cheerful and hardworking in prison! Take the fact that he was honest with the chief baker in chapter 40, even when that required delivering some very bad news! (How would you like to tell someone he is going to be executed?) And consider the fact that Joseph was bold enough to talk about God before Pharaoh during their very first meeting, when most people would try to impress. Joseph is obviously a man of very high character!

Now, why is that important?

In Ephesians 6:10-20, Paul discusses the armor of God. He says that by putting on this armor, we can stand against the schemes of the devil. That means the armor is very important! So what is the armor? Every piece of that armor has to do with Christ-like character.

The belt of truth is honesty. The breastplate of righteousness refers to integrity. The shoes of gospel preparation have to do with your understanding of the gospel and your love for the lost. The shield of faith is your confidence in God’s character. The helmet of salvation is assurance of salvation, which comes from knowing the truth and walking close to the Lord! And you take the sword of the Spirit over time as you faithfully meditate on God’s Word.

No one faces temptation like Joseph faced and gets through it successfully by accident. You have to train for that kind of a performance! And you do so through decades of faithful practice. Your character becomes the armor that protects you from the devil.

But we all know that character is not built overnight. There is a famous saying: “Sow a thought, reap an action; sow an action, reap a habit; sow a habit, reap a character; sow a character, reap a destiny.”[1] If you want to change your character, it starts with your thoughts and actions and with building godly habits. 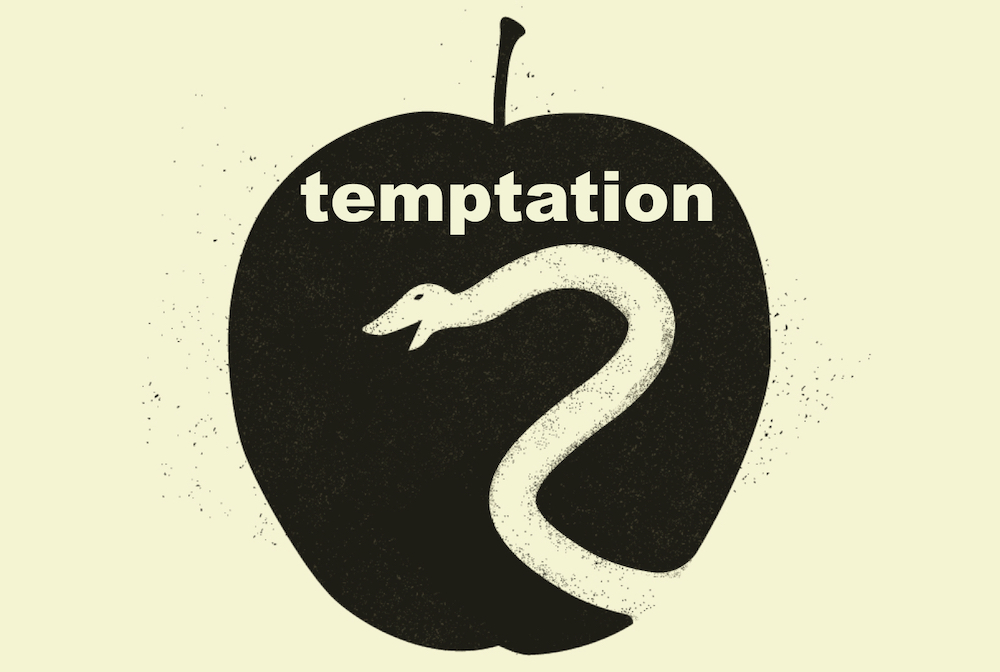 The Temptation of Judah and Joseph, Part 3

The Temptation of Judah and Joseph, Part 2

The Temptation of Christ, Parts 3-4 (continuation)